DASHGHORA– This incident occurred when I was about 6 years old when my family and relatives were out for a night stay towards the outskirts of Kolkata at Dashghora, near Bankura. What a grand place it was! The huge French windows in green towering the whole length of the walls, the checkered floors dating back to the zamindar era, the embellished antique furniture with detailed wooden works, paintings and valuables, the huge chandeliers, everything was sheer opulence. It was a fascinating place indeed, and even more was the huge terrace. The terrace covered an enormous area divided into two portions and further intricate subdivisions, and that’s what amazed us. It was the perfect place to play ‘hide and seek’ for us pesky cousins,regardless of elders’ warnings and rebuffs. 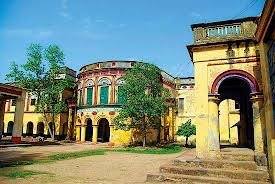 We were repeatedly asked to maintain a safe distance from a certain door located at the farthest corner of the terrace. The appearance of the door was usual grey but with two interesting padlocks. They were huge, one on the door knob and the other above the door, both secured and bound tightly by thick chains. The mystery of the infamous door made us dying with curiosity. We all had numerous questions flooding our minds related to the door, the hollow sound which came due to the passage of air, and the dying sound of the pebble we threw inside. All remained unanswered. We thought it to be a secret vault to hide treasures, until evening advanced and we all were shoo-ed away from the terrace for unknown reasons.

It was the deep of winter on that day and the moon was sheltered by a murky and sombre cloud cover. It was chilly outside and warm and cozy inside. Round about 8 pm we were gorging on the dinner made, when suddenly we heard whining sounds of someone crying and some heavy chains being dragged around the floor from the terrace. There was no question of anyone’s presence on the terrace as it was locked as per the customs, and the sound cut through crystal clear.
By our own experiments we later gathered that there wasn’t any such room full of treasures behind the mysterious door. It was the quintessential ‘goomghar‘ that every royals used to have, to supposedly punish unruly subjects by throwing them down the deep passageway where they died out of starvation.

APPARITION AT PALM AVENUE– I was about 8 years old when I visually experienced such a sight. It was a normal evening when the sun had made it’s way down the horizon. I used to be severely ill those days due to UTI and some more complications,eventually shooting my body temperature up for days until surgery.

That certain evening, strolling around the verandah as usual and gazing about at people and construction site, my eyes suddenly stationed upon something white standing near the window of the distant opposite construction site. Taking it to be normal, I shifted my gaze elsewhere. A certain movement on the corner of the eye took my attention towards the same construction site, and then what I witnessed shook me to the very core. The person clad in white, or whatever it was, flew out of the window like paper.

Losing grip over my stance, I fell down on the ground immediately as if all my energy got sucked out lowered  the blood pressure and shooting the temperature up again. Shocked, I confessed the whole matter to my mother and it was partially put down. Logically, that could have been an error too. But, after a bit of investigation about the history and origin of that area, my father was told that the property was previously owned by a man with two widow sisters who committed suicide. They were seen quite often.

EXORCISM– It was in the winters, my family got invited to a predominant Muslim village, near Hooghly, Serampore by a Muslim landlord who happens to be my grandfather’s friend. We were invited to attend his son’s wedding. Progressing towards our destination there fell a dargah on the way and the fakir who resided there was well known in the whole locality. We could see an assemblage from the car, thus out of curiosity we went out to see what the commotion was about. We saw a small girl about 5 years old behaving abnormally. We were surprised to watch that her savage behavior could not be handled by 4-5 adult men, even though her hands were tied. She was screaming in a garbled tone, presumably that of a male. We were shocked out of our wits as we hadn’t experienced any such incident before.
Bamboo sticks usually after being cut are burnt in the brick kiln on both the edges. Raw bamboo sticks are considered to be a portal, I don’t know why. Incidentally, the girl had crossed over raw bamboo sticks on her way to the pond at dawn-break. That is when the poltergeist possessed her.

The fakir, a saint with snow-white beard, a peachy complexion and piercing eyes, in white robes came out of the dargah with a small glass vile with a stopper on it. On approaching the girl, she or apparently ‘he’ started to hurl abuses at him in a hoarse voice. He was refusing to leave the girl’s body as he needed a device to live. In the bargain, the girl’s condition was deteriorating. She was turning pale and fragile but still that ‘body’ was forcefully resisting 4-5 adult men as they were having a tough time holding her.

Then, the priest started to recite holy verses and sprinkled holy water on that medium, the screams of the girl doubled. In return it pushed the priest without the usage of physical contact by a force field. Some bone-chilling altercations went on between the poltergeist and the priest for another half an hour. Everyone was spellbound with horror. The spirit got weak atlast and that very moment we saw the priest opening the glass vile. Then, a strange incidence occurred. A gust of cold wind started blowing ,shivering us to our bones and stopped immediately as soon as the fakir clamped the glass vial shut. The little girl exhausted, worn out flopped to the ground unconscious. The priest looked quite calm and composed but visibly much exhausted waging a tough war bottling the poltergeist. The exorcism was over, a life was saved.

SOMEONE IN THE ROOM– This certain spirit was never felt to be dwelling in our new home. But it confirmed it’s presence in my grandfather’s room when he was transferred to Bokaro, Jharkhand. The first time it had kicked the bed, which got noticeably jerked. The second time in the mid of August, I had fallen asleep after studying when I started to feel cold. Waking up to regulate the speed of the fan, I saw my grandfather sitting near my feet. I asked him to regulate it, and dozed off again, suddenly something struck my mind. He was posted to Bokaro, so who was that?! Startled by the question which arose, I woke up with a start. There was no one, the chair was empty, it had disappeared!

On the third incident, we got to understand that it was afraid of dogs. That night my grandmother was sleeping in that room. My grandmother is a strong personality and she isn’t afraid of stimuli like these. That night, the dogs had started to bark uncontrollably which was unbearable when suddenly something crashed on the bed. out of agitation she kicked the cause which irritated her and it scrambled off and vanished. Later, we had put up a flag of Lord Bajrangbali, after which we never experienced any other incidents like these.

The discussion about the paranormal had always been skeptical, being debated between science and myth. But there are some facts which science fails to explain, somethings which are beyond scientific explanation and magical illusion.

4 thoughts on “More Paranormal Experiences (Not mine)”