This post is different from the other posts. This is the story of our block water cooler from my point of view. I stay in a hostel in IIT Kharagpur campus. Each hostel is divided into blocks. Our hostel has 12 blocks. We have one water cooler for two blocks.

The water cooler in our block is under continuous pressure. It will be since it is a hostel. Since past few months the cooler has not been in working condition. I did register a complaint but given it is West Bengal, the complaint has not been addressed yet. I’ll explain the mindset of most Bengalis in another post. So, since it is not working it has been turned off. One day I heard something trying to start. When I went to check, I found some dolt had turned on the water cooler and left it like that. My first question, if you turn something on, wouldn’t you recognise by the sound if it is running or not? 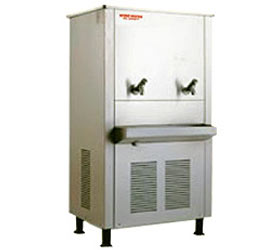 From that guy’s action, it was evident he didn’t have that sense. I disconnected the machine by pulling the plug out of the outlet. I had hoped this should be enough sign that the water cooler is not working and hence is disconnected. It should have been utterly obvious that no one will turn off a water cooler during summers. Well, this was not enough. Some dumb kid turned it on again and left it like that. This went on for several days until one day when I had had enough.

I drafted a notice explaining how someone should check if the water cooler is running and use his basic sense in the most insulting language possible and pasted it on the water cooler. The notice said:

“To whomsoever keeps turning on the water cooler

How the hell did you get into IIT Kgp? Who the fuck did you bribe? I am asking this because with this little shit piece of brain like yours you sure couldn’t have cracked IIT JEE. When you turn on the cooler, it should be evident from the not running sound that it is broken. To explain that the cooler is not running it was disconnected. It is obvious that no one would disconnect a running cooler during summers. How do you survive with so little sense? You have proved very well with so little brain function that your existence on this planet is redundant.”

The cooler was never turned on again. However, someone tore up the notice after a few days. Apparently, stupid people don’t like being called stupid. I wonder why. I mean it is just the truth. But again, they wouldn’t have been stupid if they could accept truth as it is.