Mehrangarh Fort (Hindi: मेहरानगढ़ का किला), located in Jodhpur,Rajasthan, is one of the largest forts in India. 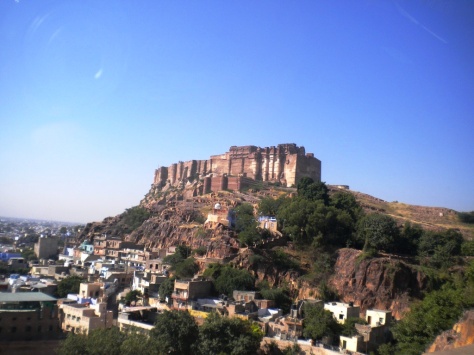 The fort is situated 400 feet (122 m) above the city and is enclosed by imposing thick walls. Inside its boundaries there are several palaces known for their intricate carvings and expansive courtyards. A winding road leads to and from the city below. 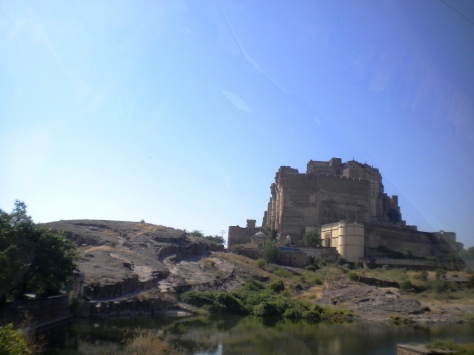 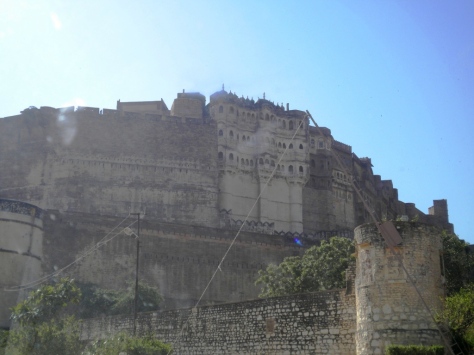 Rao Jodha one of Ranmal’s 24 sons became the fifteenth Rathore ruler. One year after his accession to the throne, Jodha decided to move his capital to the safer location of Jodhpur, as the one thousand years old Mandore fort was no longer considered to provide sufficient security.

With the trusted aid of Rao Nara (son of Rao Samra), the Mewar forces were subdued at Mandore. With that, Rao Jodha gave Rao Nara the title of Diwan. With the help of Rao Nara, the foundation of the fort was laid on May 12, 1459 by Jodha on a rocky hill 9 kilometres (5.6 mi) to the south of Mandore. This hill was known as Bhaurcheeria, the mountain of birds. According to legend to build the fort he had to displace the hill’s sole human occupant, a hermit called Cheeria Nathji, the lord of birds. Upset at being forced to move Cheeria Nathji cursed Rao Jodha with “Jodha! May your citadel ever suffer a scarcity of water!”. Rao Jodha managed to appease the hermit by building a house and a temple in the fort very near the cave the hermit had used for meditation, though only to the extent that even today the area is plagued by a drought every 3 to 4 years. Jodha then took an extreme measure to ensure that the new site proved propitious; he buried a man called “Raja Ram Meghwal” alive in the foundations. “Raja Ram Meghwal” was promised that in return his family would be looked after by the Rathores. To this day his descendants still live in Raj Bagh, “Raja Ram Meghwal’s” Garden, an estate bequeathed them by Jodha. 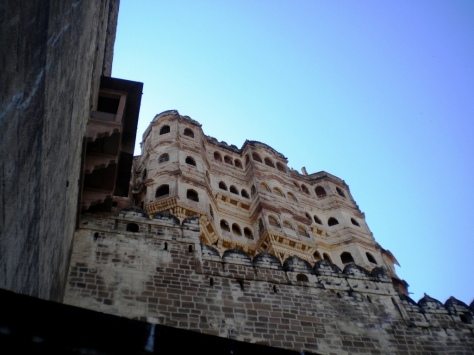 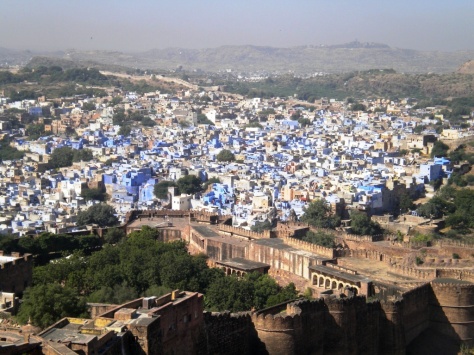 Mehrangarh (etymology: ‘Mihir’ (Sanskrit) -sun or Sun-deity; ‘garh’ (Sanskrit)-fort; i.e.’Sun-fort’); according to Rajasthani language pronunciation conventions,’Mihirgarh’ has changed to ‘Mehrangarh’; the Sun-deity has been the chief deity of the Rathore dynasty. Though the fortress was originally started in 1459 by Rao Jodha, founder of Jodhpur, most of the fort which stands today dates from the period of Jaswant Singh (1638–78). The fort is located at the centre of the city spreading over 5 kilometres (3.1 mi) atop a high hill. Its walls, which are up to 36 metres (118 ft) high and 21 metres (69 ft) wide, protect some of the most beautiful and historic palaces in Rajasthan.

Entry to the fort is gained though a series of seven gates. The most famous of the gates are: 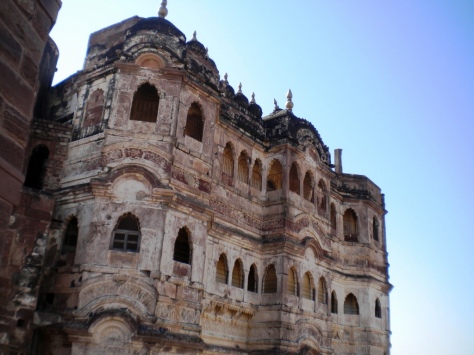 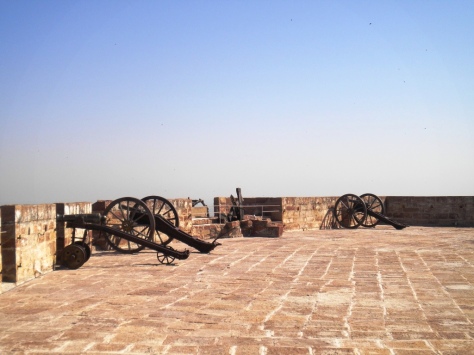 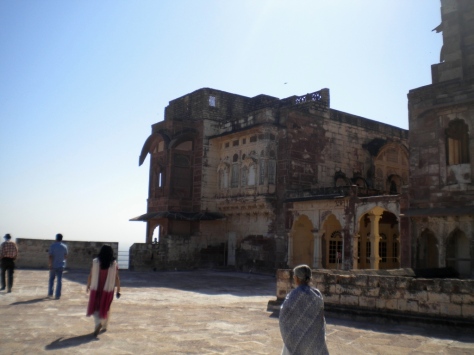